How McConnell blocked amendments on the defense bill

The Senate voted Monday to begin debate on the National Defense Authorization Act for Fiscal Year 2020 (S. 1790). Senators approved the motion to proceed to the legislation by a vote of 86 to 6. Once on S. 1790, Majority Leader Mitch McConnell, R-Ky., offered an amendment (Amdt. 764) to the underlying legislation on behalf of the Chairman of the Senate Armed Services Committee, James M. Inhofe, R-Okla. The McConnell/Inhofe Amdt. 764 includes the defense bill as reported by the Armed Services Committee and represents the Senate’s latest version of the legislation. As drafted, the McConnell/Inhofe Amdt. 764 is an amendment in the nature of a substitute (ANS). Consequently, the Senate follows the amendment tree depicted in Chart 4 in Riddick’s Senate Procedure (depicted below and on page 89 in Riddick’s) as it considers any additional amendments.

After filing cloture, McConnell then moved to control the debate by filling the amendment tree (depicted above) to prevent his colleagues from offering their own amendments without his permission.

Filling the Tree: A Step-by-Step Analysis 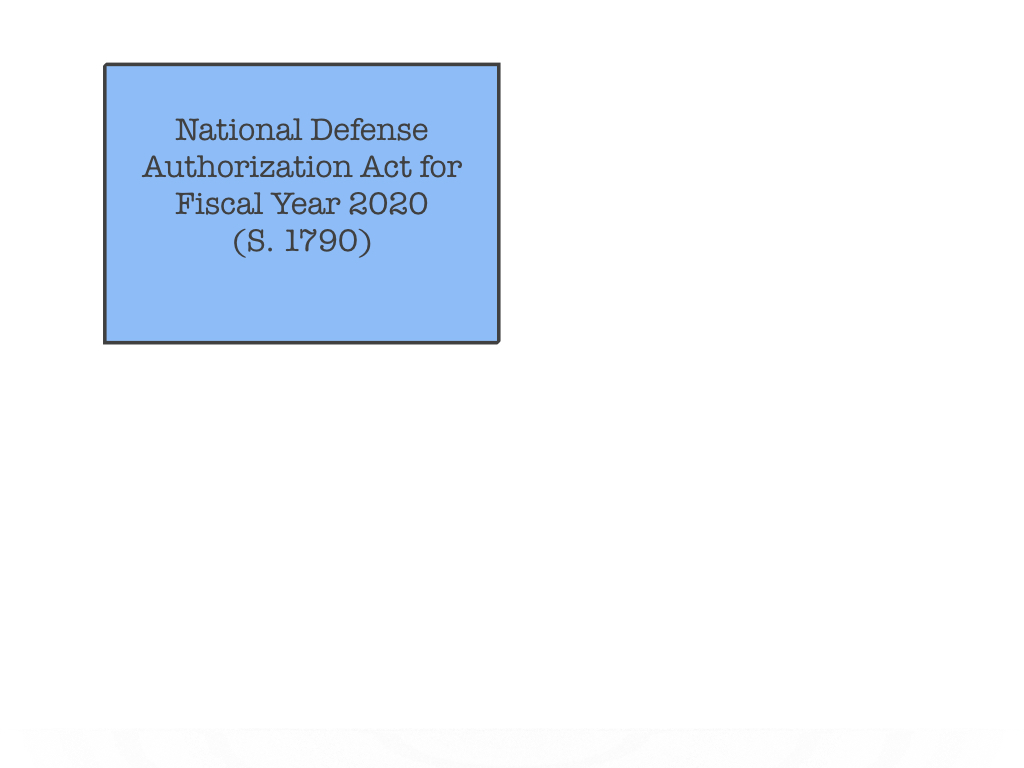 McConnell offered McConnell/Inhofe Amdt. 764 to S. 1790 and asks for the yeas and nays. 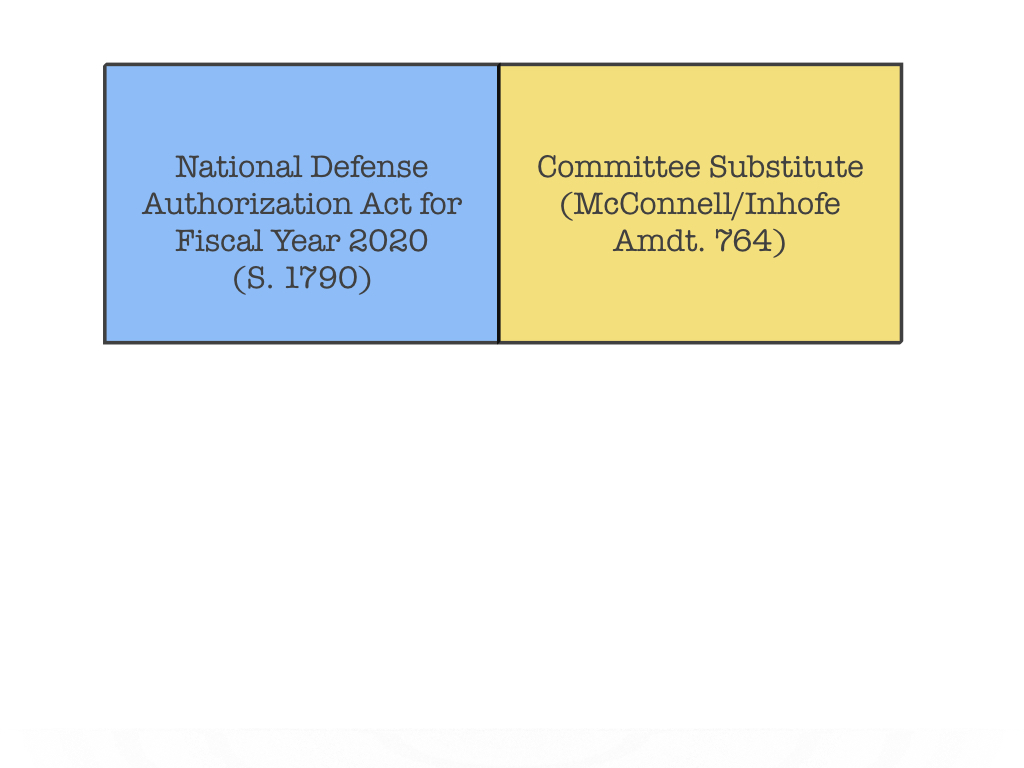 After the McConnell/Inhofe Amdt. 764 is pending, it is treated as part of the underlying bill for purposes of amendment. Senators can then offer amendments at branches A, C, and E. 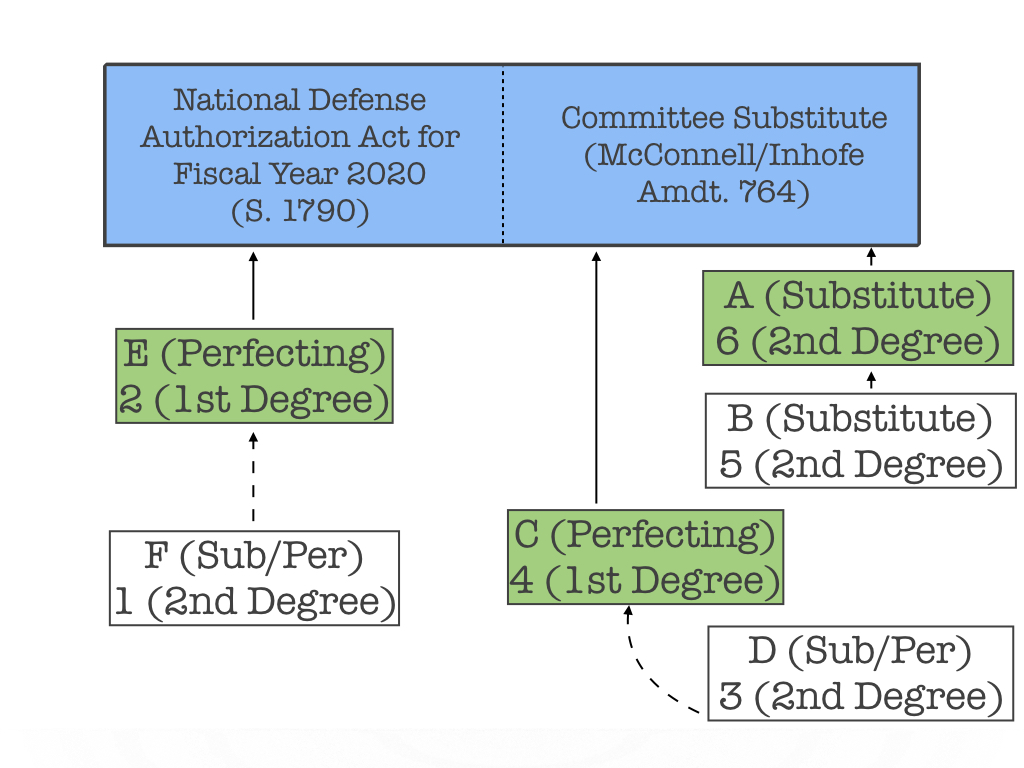 McConnell then offered Amdt. 861 on behalf of Mitt Romney, R-Utah to the McConnell/Inhofe Amdt. 764 (occupying branch C) and asked for the yeas and nays. 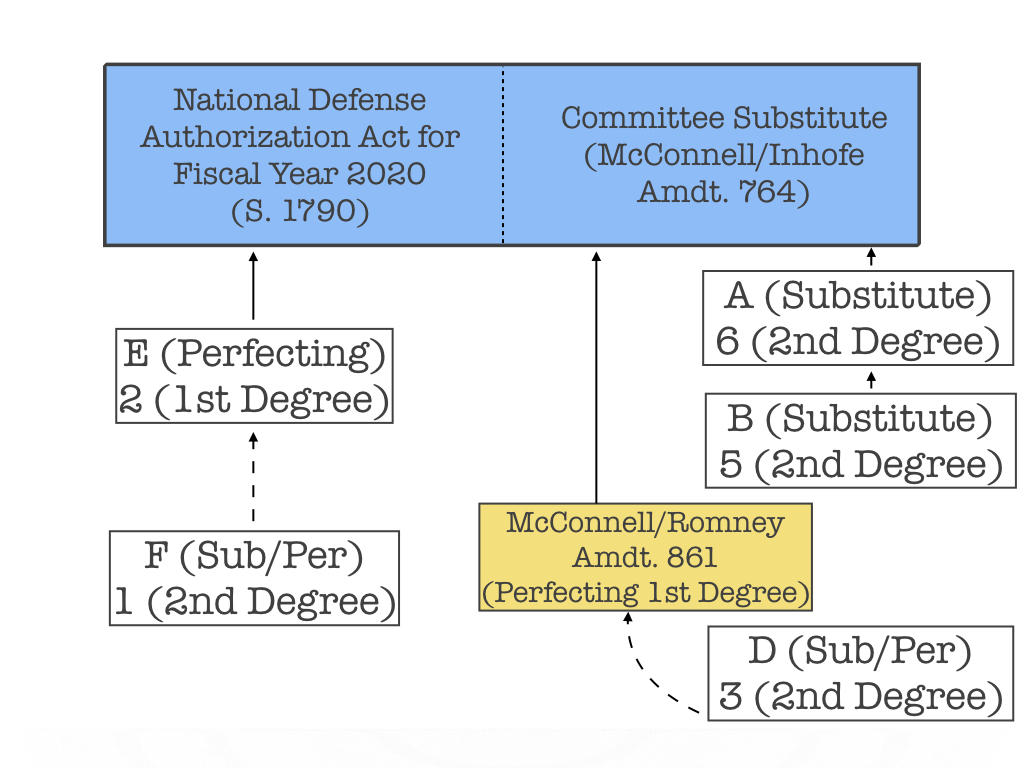 The McConnell/Romney amendment clarifies that the funds authorized by the legislation can be used to defend “the Armed Forces and United States citizens” against attacks by “foreign hostile forces.” 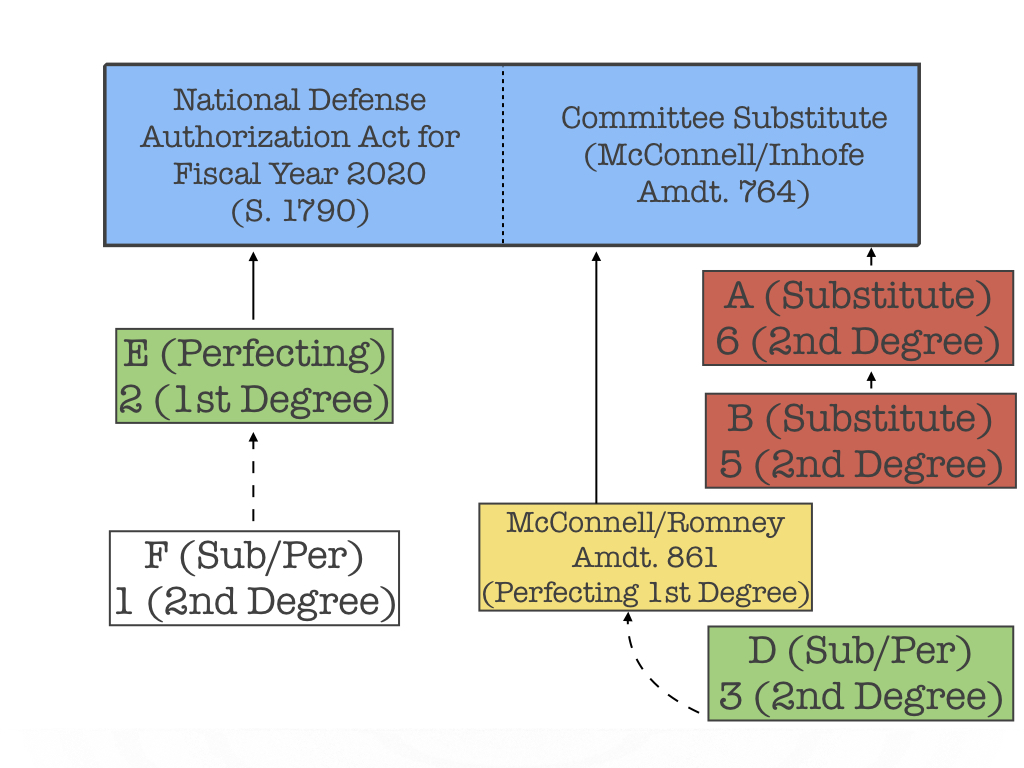 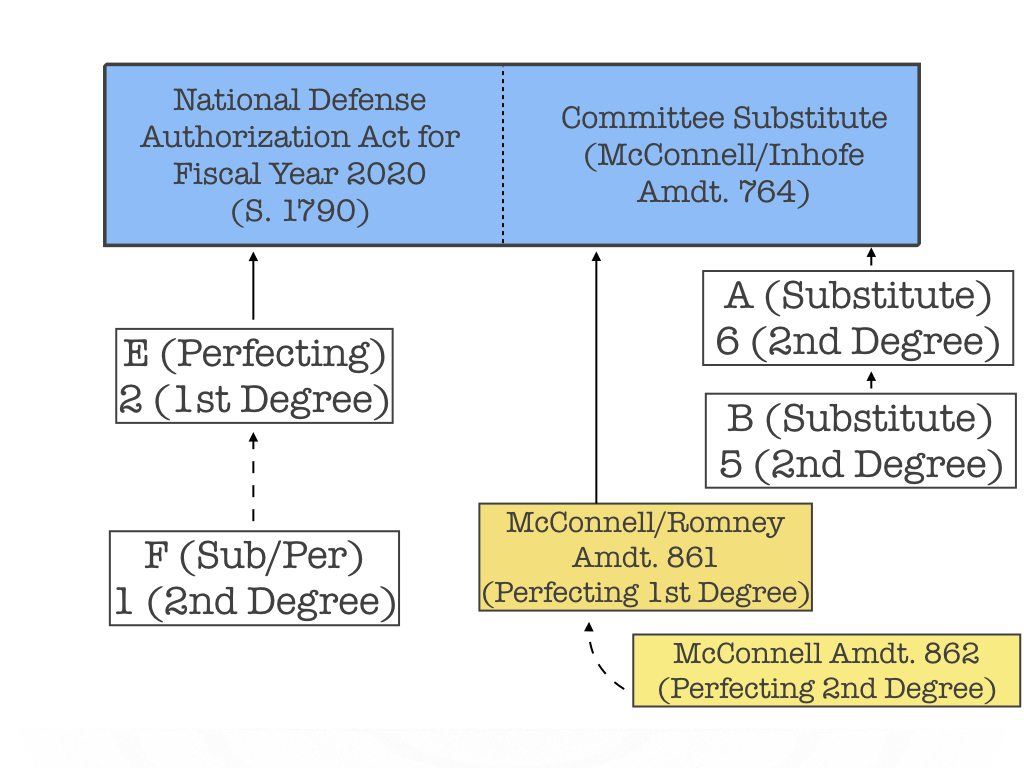 Amdt 862 is a perfunctory amendment designed to block other amendments at branch D. The amendment states that the underlying legislation “shall take effect 1 day after the date of enactment.”

At this point, senators can offer amendments at branch E only. 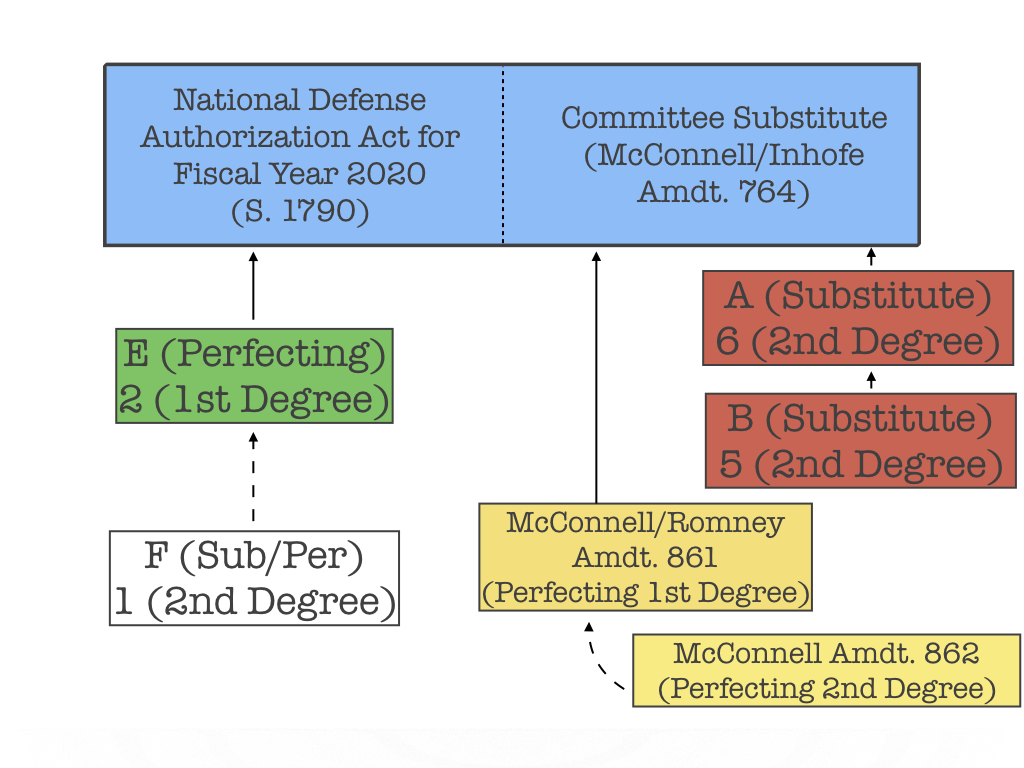 McConnell then offered Amdt. 863 to the language proposed to be stricken by the McConnell/Inhofe Amdt. 764 (occupying branch E) and asked for the yeas and nays. 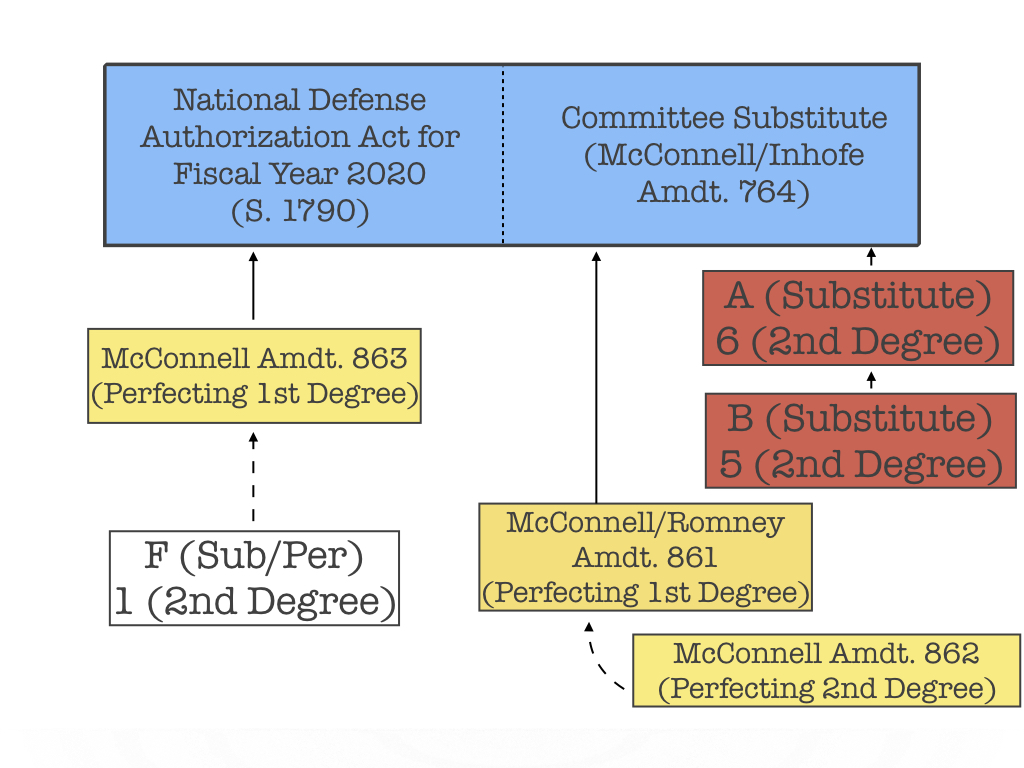 Amdt. 863 is a perfunctory amendment designed to block other amendments at branch E. The amendment states that the underlying legislation “shall take effect 3 days after the date of enactment.”

At this point, senators can offer amendments at branch F. 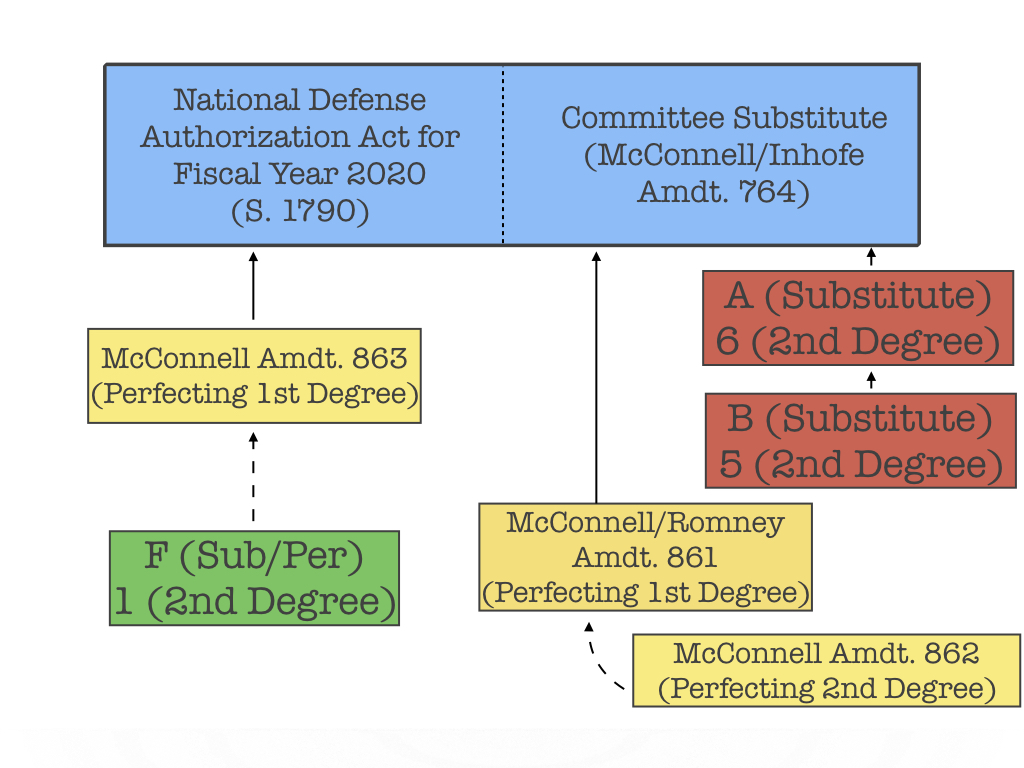 McConnell then offered Amdt. 864 to Amdt. 863 (occupying branch F) and asked for the yeas and nays. 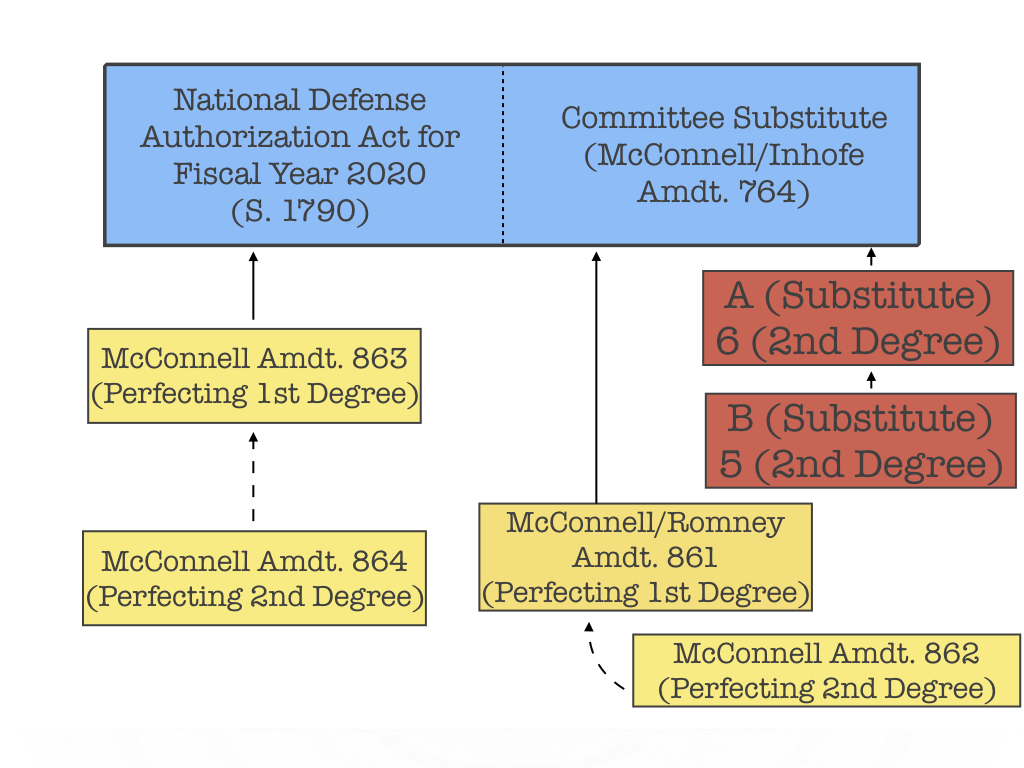 Amdt. 864 is a perfunctory amendment designed to block other amendments at branch F. The amendment strikes “3 days” in Amdt. 863 and inserts “4 days.” Its effect is to stipulate that the underlying legislation shall take effect 4 days after the date of enactment.

At this point, the tree is full. There are no available branches to which senators may offer amendments (under the Senate’s current precedents governing the amendment process).

After filling the tree, McConnell filed cloture on the underlying legislation (S. 1790). Under Rule XXII, the underlying cloture vote on S. 1790 ripens immediately after the Senate votes on the McConnell/Inhofe Amdt. 764 along with any amendments pending thereto. If a three-fifths majority of senators (typically 60) vote to invoke cloture/end debate on S. 1790, the Senate will begin a period of post-cloture debate time that may last up to 30 hours. At the end of that period, senators will vote on S. 1790 as amended by the McConnell/Inhofe Amdt. Only a simple majority of senators (typically 51) is needed to adopt S. 1790 (as amended) at that point in the process.

The Motion to Recommit

After filing cloture, McConnell moved to recommit S. 1790 to the Armed Services Committee with instructions that the committee report the legislation back to the full Senate forthwith (i.e., immediately) with the McConnell Amdt. 865 (i.e., specifying the content of the instructions to the committee) and then asked for the yeas and nays. Amdt. 865 is a perfunctory motion/amendment designed to block other senators from moving to recommit S. 1790 with instructions. The motion/amendment instructs the Armed Services Committee to add the following at the end of the legislation: “This Act shall take effect 5 days after the date of enactment.”

Because motions to recommit with instructions are amendable in two degrees, McConnell then offered Amdt. 866 to Amdt. 865 (i.e., the instructions) to prevent his colleagues from doing so and asked for the yeas and nays. Amdt. 866 is a perfunctory amendment. It strikes “5” in the committee’s instructions and inserts “6.” The effect is to instruct the Armed Services Committee to add the following at the end of the legislation: “This Act shall take effect 6 days after the date of enactment.”

McConnell then offered Amdt. 867 to Amdt. 866 striking “6” and inserting “7.” The effect is to instruct the Armed Services Committee to add the following at the end of the legislation: “This Act shall take effect 7 days after the date of enactment.”

Note: These steps are not reflected on the amendment tree pursuant to Senate custom. Pursuant to Senate precedent, the motion to recommit is not in order after senators have invoked cloture.

With the tree filled, McConnell maintains control over the floor debate. The McConnell/Romney Amdt. 861 operates as a blocker amendment. Until senators dispose of it in some way, they will need unanimous consent to set it aside temporarily (once the norm) so that they can offer other amendments to the underlying legislation (i.e., the McConnell/Inhofe Amdt. 764). With the blocker amendment in place, McConnell is thus in a stronger vis-à-vis other senators who wanted to offer an amendment to the defense bill. If McConnell refuses to grant his consent to set aside the blocker amendment, the leverage senators have left under the Senate’s current precedents is to block cloture. Doing so forces McConnell to choose between allowing a vote on the amendment in question and not passing defense bill. But blocking cloture is difficult because it takes 41 senators not to vote to end debate on the NDAA.

That McConnell did not ask for the yeas and nays on the tree filler Amdt. 862 to Amdt. 861 suggests that he is likely to withdraw the amendment if needed to get the votes for cloture if it appears that he will fall short of 60 on Wednesday. Withdrawing the amendment reopens branch Dand allows McConnell (or Schumer) to offer another amendment in its place. (Senators cannot withdraw (or modify) their amendments after the yeas and nays have been ordered.)