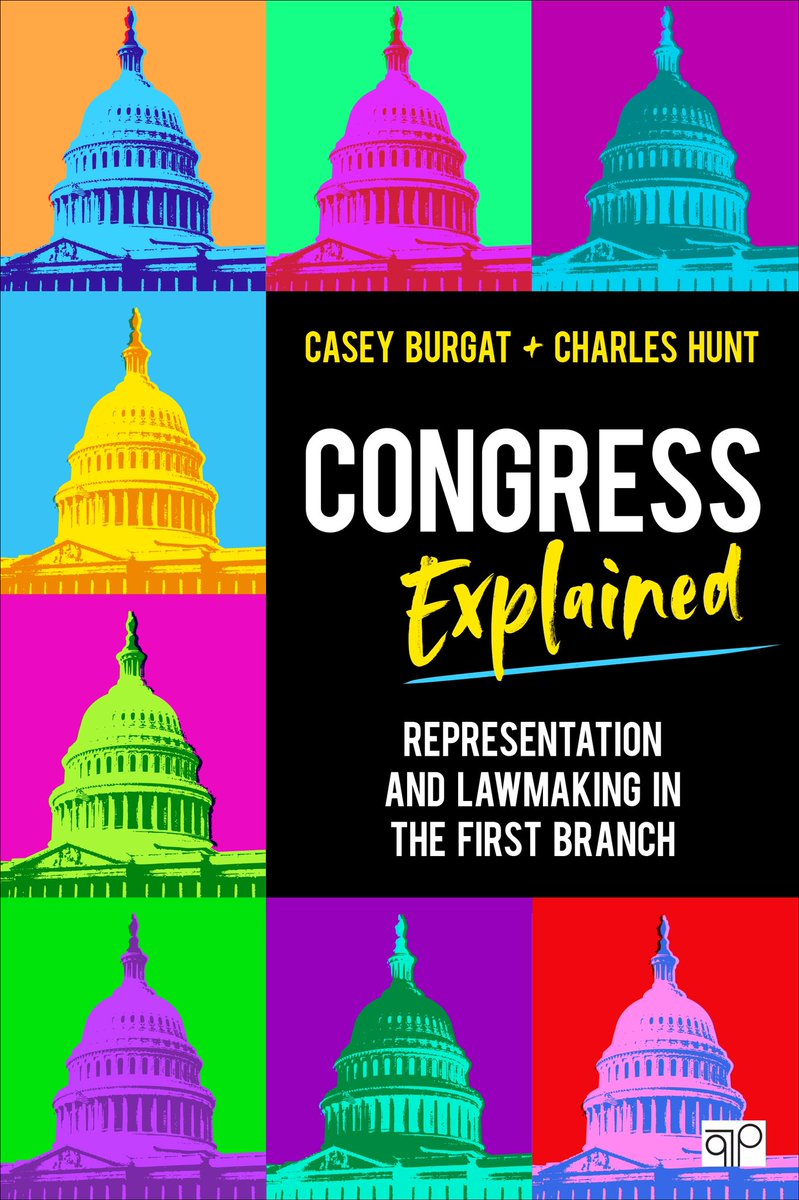 Casey Burgat and Charles Hunt have a new textbook that belongs on the bookshelf of everyone interested in Congress and how it works. For those already sold, here is the easy part: Just buy Congress Explained: Representation and Lawmaking in the First Branch! (And you can reach Casey here and Charles here if you would like to talk to them about it.)

But for readers who want more, here are Burgat and Hunt in their own words from the preface of their new book:

If we’re being honest, this book is the result of a glut of frustrations. As idealistic students at both the undergraduate and graduate levels, we pursued political science because we maintained bright-eyed visions of government and its potential to create big, necessary change. It could do so, we believed, largely through Congress: a collection of dedicated public servants who work to turn the public’s will into federal policy. We grew up on The West Wing—sue us. As professors, we’ve become more open-eyed to Congress’s shortcomings, inconsistencies, and flat-out failures. This winding path has left us torn between two often competing goals: teaching about Congress and government in a way that stirs zeal and civic optimism in the young people we teach, while also being brutally honest about why so many of our governing institutions are under historic stress.

Our respective career paths have provided both an academic and the practitioner’s perspective on Congress and how it works. In each, we’ve admittedly struggled with the persistent gap between the Congress we want in theory and the Congress we have in practice. They are not the same thing. We believe that bringing those two concepts closer together, minimizing that gap, requires a reevaluation of the way we think and teach about the institution we love. Too often, we’ve felt that the Legislative Branch is taught and learned as some foreign, inaccessible entity operating in its own bubble by actors we’ll never meet let alone influence. The way Congress is explained is commonly reduced to broad, abstract theories on the one hand; or, perhaps even worse, a mind-numbing listing of cumbersome procedures and processes on the other.

This way of thinking, teaching, and learning about Congress has subtle yet vital consequences. Despite its impact on our daily lives, students often feel disengaged from Congress, government, and politics from the outset. Precisely because it feels so distant, too many approach Congress and its varied responsibilities and inner workings as a theoretical exercise rather than a tangible and necessary practice. We think there’s a better way. It begins with a candid discussion of how Congress works day-to-day and focusing on how members—especially those with whom we passionately disagree— have come to see their jobs as representatives of voters who have chosen them to be their voices in Washington, DC.

With all of this in mind, we wrote this book with two primary goals. The first is to refocus our collective attention on a far-too-overlooked aspect of Congress’s role in our system of divided government: representation. We know that the job description of a member of Congress requires, appropriately, that they debate and pass laws. But policymaking is only one facet of the job. The institution of Congress is a lifeless body without its individual members who give it purpose, activity, and legitimacy. As the people’s branch of government, members of Congress have enormous representational duties to ensure that their constituents—whether they voted for them or not—feel heard in the halls of power. Beyond simply passing legislation, we believe that representation includes how members communicate with constituents, act in their home districts, and descriptively reflect the people whom they’re tasked to serve.

Although the study of Congress as an academic discipline is as strong as it’s ever been, we’ve found the actual classroom instruction of Congress has tended to fall too squarely into one of two restrictive camps. The first is that polarization, partisanship, and political parties explain everything we need to know about Congress, how it operates, and how lawmakers make and defend decisions. The second focuses just as narrowly on procedures, process, and the institution as a whole, with little to no reference to the individual members who put these processes to use to achieve their legislative goals. Both of these perspectives are necessary to truly understand Congress. However, when pursued so narrowly, we believe they neglect the bedrock representational pur- pose of Congress.

A Congress textbook written through the lens of representation is particularly important given the cohort of lawmakers that have come to define Congress over the last several election cycles. More women and members of color are serving in Congress today than in any other Congress. It isn’t even close (though we still have much work to do). The 2018, 2020, and 2022 congressional elections have produced a new generation of representatives who not only help Congress inch towards gender, age, and racial parity, but who bring with them a bevy of new experiences, ideological perspectives, and willingness to speak up about important issues that have for too long stayed off of the congressional agenda. These members aren’t without their controversies, nor are they universally beloved. In many cases, their brashness and diversity of opinion have rankled their own parties—especially their leaders. At the same time, however, this new legion of lawmakers consistently forces all of us to reconsider the questions that we believe should be at the center of the study of Congress: who exactly is it that we’ve elected, and how (and how well) do they represent us?

The second primary goal of this book is to demystify the “member of Congress” experience. From deciding how to vote on a bill to what procedures are used to explain- ing why inaction can often be rational, we want our readers to understand why our beautiful and frustrating Congress has come to operate the way it does. We promise the way things work wasn’t developed by accident or happenstance. By explaining the way Congress operates—from campaigns to committees to legislating—through the lens of individual members, readers can better understand the many competing challenges that lawmakers feel on a daily basis. Discussing member motivations, purposes, back- grounds, and constraints allows all of us to more thoroughly consider how questions of representation affect how well (or not) Congress fulfills its core responsibilities to the American people.

Our pedagogical approach in this textbook reflects these goals. It is our position that students need to understand Congress honestly as it is, warts and all. Nothing is more important as this in the task of realizing Congress as it can be. A major component of this understanding is the trajectory of Congress across its history and its many evolutions. Congress has varied in its size, its scope of power, its partisan makeup, and a thousand other core characteristics over nearly 250 years. Observing and track- ing these changes is not just an amusing exercise, but an acknowledgment that the Congress we know (and love or hate) today is radically different from the congresses of Speaker Rayburn, or Senator Calhoun, or Representatives Madison and Lincoln.

The Congress of today is even much different than the Congress of a decade ago despite many of the same members still serving in the same seats. And if we can be sure of one thing, it’s that the Congress of thirty years from now will look and operate much differently from the one we see now. Politics change; voting constituencies change; the rules change; the country changes. Not all of these changes have been or will be pretty. But in this textbook, students will learn to identify these changes and analyze their consequences for both representation and lawmaking.

Burgat and Hunt also penned the below to explain more of what you need to know about their book, its use and how it differs from others on the market.

There are a number of fantastic Congress textbooks already on the market, several of which have been penned by folks reading this post. But, after years of teaching Congress to students and practitioners alike, we aimed to write a book that was a little bit different. Here’s how:

Below is the book’s table of contents. As a textbook, college students are the primary audience. With that said, we also wrote it to be valuable to those with even a passive curiosity of the First Branch. It’s our hope that reporters, congressional staffers, think tankers, lobbyists, and everyone in between can find some useful nuggets within Congress Explained. For those even semi-interested, you can request a review copy through Sage/CQ press here.

One final note: we, as authors, would love to talk about the book in any way that would be helpful to those who read it. We can drop in your classes, respond to student questions via email or phone, write up blurbs for outlets to which you’re connected, jump on podcasts or other media. We love this stuff and are excited it’s out in the world. 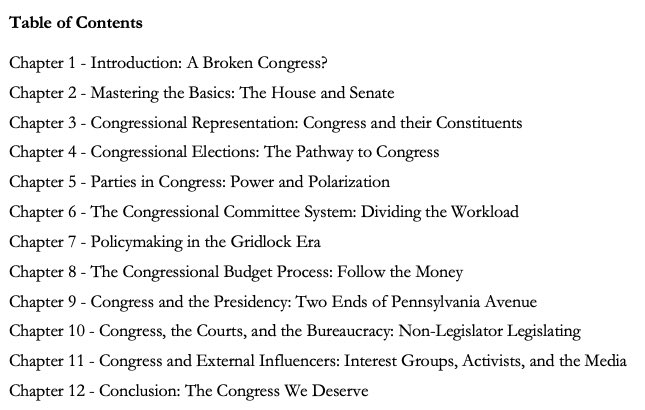 William Gray is the communications director at the R Street Institute. He is also founder and curator of Floor Charts - the online archive of charts, ...

More by William Gray
+ See All